IPOC (Integrated Plate boundary Observatory Chile, www.ipoc-network.org) is a European-South American network of institutions and scientists organizing and operating a distributed system of instruments and projects dedicated to the study of earthquakes and deformation at the continental margin of Chile. 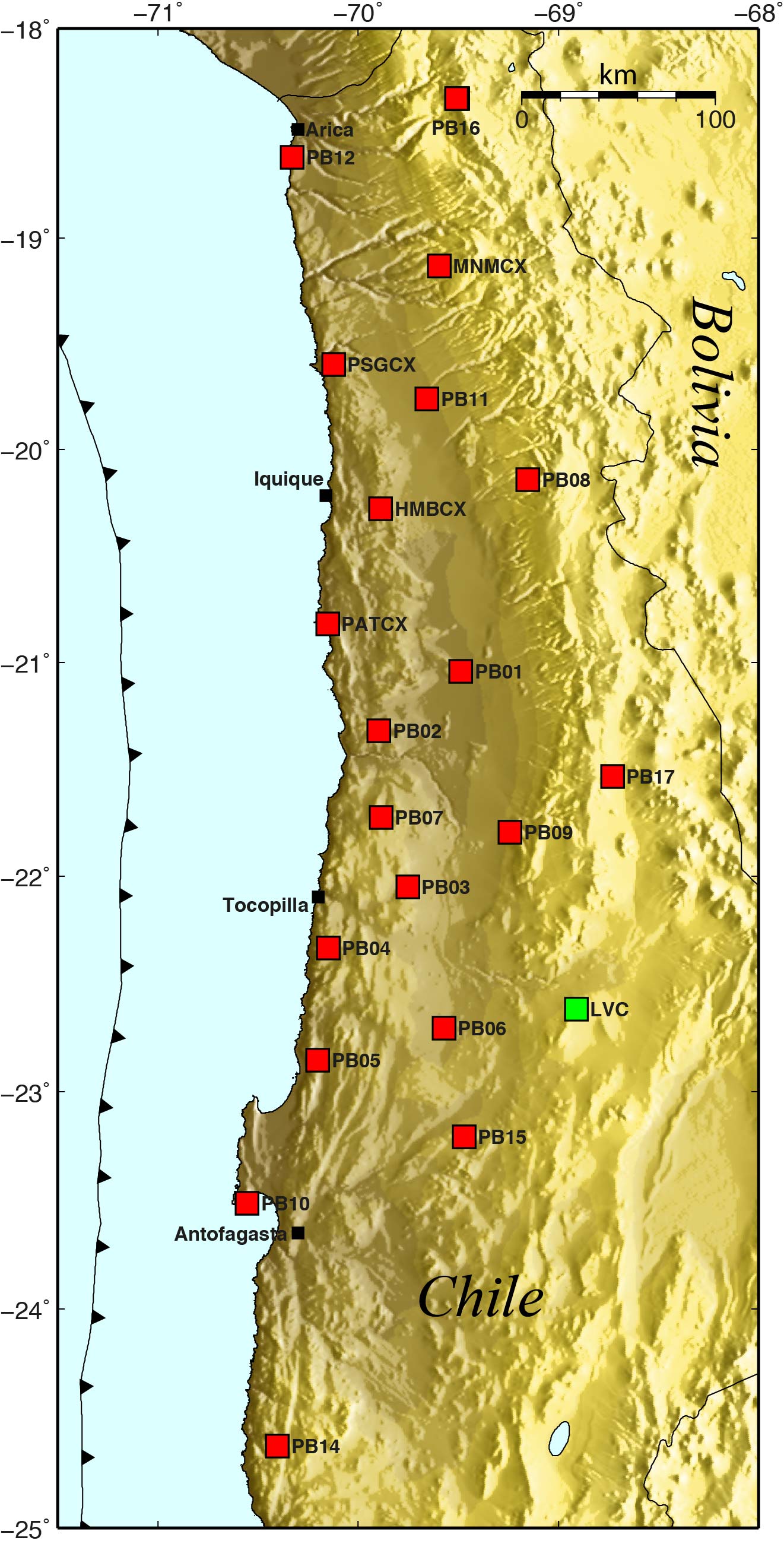 Map: A key component of IPOC are its multi-parameter observatories, where at the same site a suite of different physical parameters are measured continuously. So far 20 such stations are installed across the forearc of central Chile. All sites are equipped with STS-2 broadband seismometers and accelerometers. Additional instrumentation includes continuous GPS, electric and magnetic field (MT), surface inclination, and climate (temperature, air pressure, humidity). Most sites transmit their data in near-real time to the scientific community.

24h seismogram: The map is clickable, i.e., click on any station shown in the map above. Plots according to stations in the map show the last 24 hours of the vertical component of seismograph stations. The occasional signals are mostly from earthquakes nearby, either from inside the subducted oceanic plate about 100 km below the surface or from the megathrust fault between the Pacific and South American plates to the west of the network. Have fun … (Data is provided by GEOFON)

Worldwide occurrence of Earthquakes during the last 14 days provided by the Geofon Earthquake Monitor. Click the map below to look at the latest Earthquakes.

Time animated aftershock series for the Mw 7.7 2007 Northern Chile earthquake (Schurr et al., 2012, doi:10.1029/2011JB009030). 0.5 m slip contour lines and main shock epicenter are also plotted. The aftershocks quickly fill the region that slipped during the mainshock, hinting that accumulated stress was not completely relaxed during the mainshock. Such a pattern is an indication that the rupture surface is “rough”, i.e. has heterogeneous frictional properties, a characteristic that is quite typical for the deepest part of the megathrust seismogenic zone, where these earthquakes occurred.

Animation showing the evolution of horizontal displacements at coastal GPS stations near Pisagua segment leading up to the mainshock of April 1st 2014. The dashed line is the trench and the solid black lines are the coastline and Chilean borders. Blue arrows show cumulative GPS displacements (the deviation from the zero position after de-trending and common mode filtering). Forward modeled GPS displacements of the seismically related slip are shown with red vectors. Events from the foreshock catalogue for days within the smoothing average window (+/- 4 days) are plotted in dark grey. Until two weeks brfore the mainshock, displacements are small and random. Beginning with the largest foreshock 16th March 2014, displacement vectors point consistently to the pre-seismic slip region. –> view animation